Using a parabolic reflector to direct the heat and flash of a fast burning magnesium charge, the inventor produced a "Death Ray" of sorts. As you can see from the picture it is an unwieldy looking device, but very real, even if it is pulpy looking. There were several other variations on this theme from around the same time, many of them really did work, though for whatever reasons they were not embraced by the public and failed to become commercial successes. I am sure the unwieldiness combined with needing to be able to quickly dispose of molten magnesium slag may have presented potential buyers with images of starting fires at their feet or blinding allies with the brightness of the blast.

Still though, while the pistol in this story "Stunned", on a larger scale this would make one hell of a great Zeppelin weapon! Imagine being able to threaten ground targets with incineration from above. Or swatting down pesky enemy fighter planes in flames. Very cool (Or really hot in this case!), very pulpy and very Crimson Skies!

I really can see many advantages, while it would be fairly long range as a point attack/defense weapon, but not too far, only a few miles at the most, it would not be anything like a bullet that keeps on sailing towards the horizon. Beyond it's direct line and range, air, dust and humidity cooling the ray would rapidly diminish it's power, limiting it's effective range to no more than a few miles. It's time to target would be nearly instant, unlike conventional projectiles which take time to get there. There would be no "Arc" or bullet drop, it is a true line of sight weapon. And during the short duration of it's burn, the ray would remain viable, it could be swept across multiple targets or left in place to burn completely through buildings on the ground. With a bit of experimenting, ranged focus could be adjusted by slightly warping the arc of the mirror, in fact ideally you would want to use hundreds of smaller mirrors but give the technology of Crimson Skies that might not be feasible, but warping the mirror could be possible. Plus a Zep with any altitude would be able to drop the wasted molten slag without fear of starting an unintended fire as it would have time to air cool on the way down.

Magnesium, phosphorous, sodium could be used for high temp bright flashes and carbide or carbon arcs could be used for slightly cooler but longer sustained burns, it will never be as hot as a true LASER, but it would be more than hot enough for the task.. This really is not pulp SciFi, though it does have a pulpy feel, this is a valid technology that was never fully developed, the primitive ancestor of the LASER. . .

Modern Mechanix Jan 1935 wroteColonGerman Death Ray Pistol Stuns Animals at Mile Range
AN ODD-LOOKING pistol firing a magnesium charge said to be capable of stunning men and animals a mile away is now being demonstrated in Paris. Its inventor, a German who was forced to flee from his native land, hopes to sell the idea to the French government.
Scientists believe the operation of the device is based upon the “thermit reaction” now used in certain welding operations. The reflector mounted on the barrel of the gun would concentrate the deadly heat rays, and protect the operator from the dazzling glare of exploding magnesium. 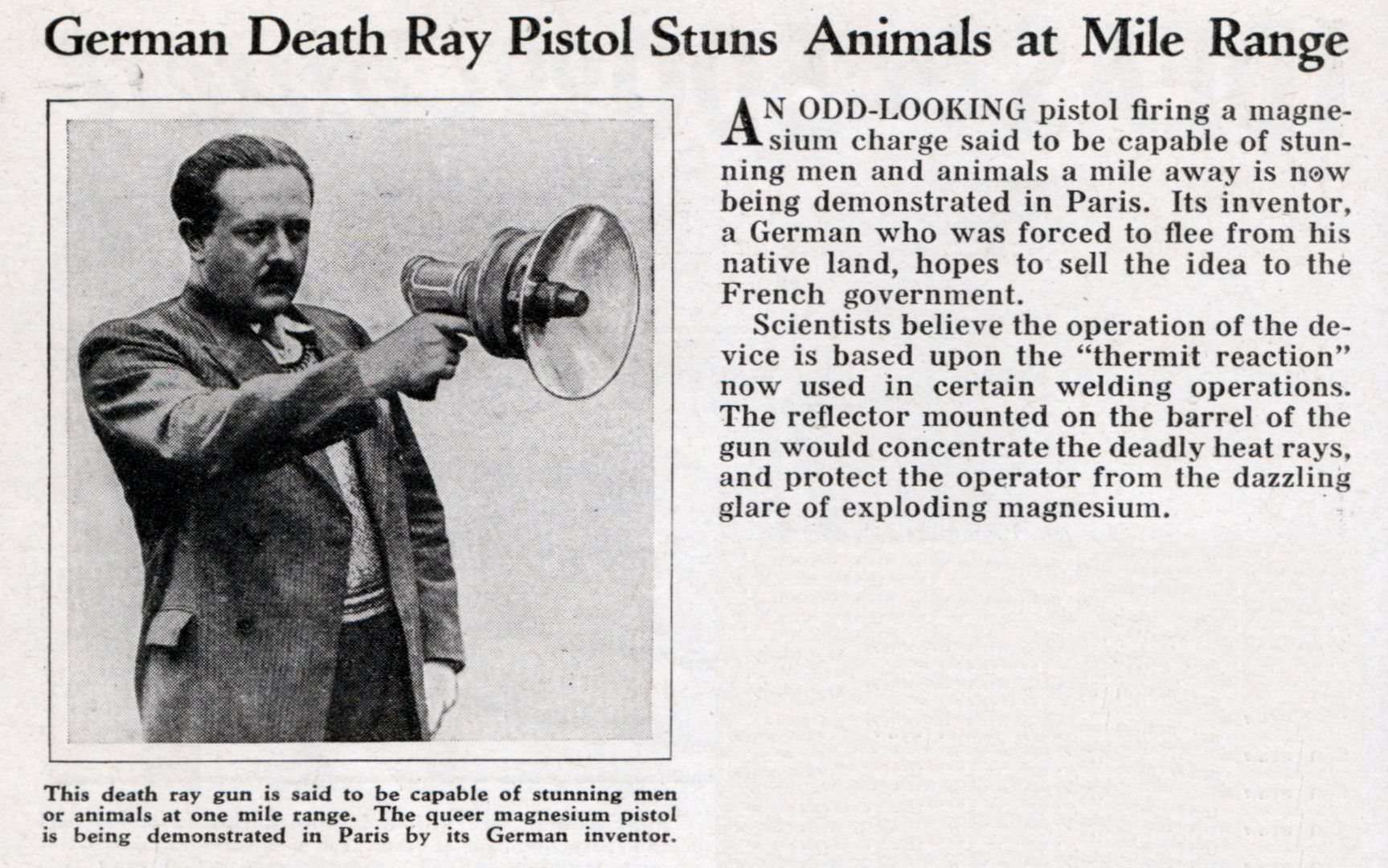