For anything not in the above. Ground combat/personal combat. Anything to do with CS, but not already covered.
BUTTON_POST_REPLY
18 posts

This is a jimmied-up list of what ground and sea vehicle companies that I would believe would have existed in Crimson Skies, taking what I can see from the old Crimson Skies Universe Corporations page.

GROUND
From what I can see, the major car/truck manufactures at the time were Ford (as in the Ford Hoplite), Rolls Royce (who make most of the engines in the game), and the Canadian Car & Foundry (look up Bell Aviation on the Crimson Skies Universe Corporations page). These companies did exist in reality, but their designs in CS are different. Chevrolet didn't exist for some reason, but if anyone finds proof otherwise, I can change that.

Ford: as explained above, they build the Ford Hoplite, or autogyro, which means that Imperial Taxi and others would have big enough contracts with them that they would have enough money left over to produce ground vehicles and still make profit in an aerially dominated world. These vehicles would commonly be civilian, such as small coups and pickups on Model A frames, and larger trucks, which were generally the front end of a Model A, with an elongated rear end. 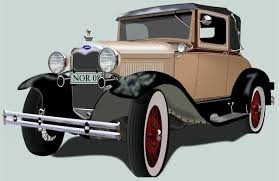 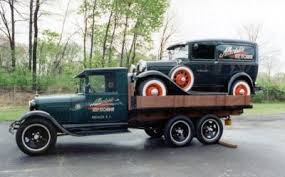 Rolls Royce: for some reason makes the most powerful engines of the time, commonly used on zeppelins. Again, leaving enough profit to build ground vehicles. As they do today, Rolls Royce would be more for luxury, like the limos of their time. There can be multiple models, but all are more centered to the luxury of the high life. 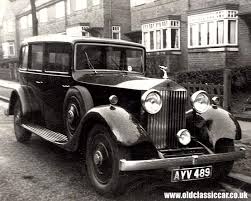 Canadian Car & Foundry (CCF): part of the Bell Aircraft Corporation, the CCF is more centered around Mass Transit, by building busses and railcars. They don't build any small cars, but make just a good a profit contracting part of their factories and facilities for Bell to make Valiants. They also seem to be part of the General Motors/Messerschmitt company due to some sort of lawsuit, but too many politics to explain.

Trains: train companies are at the dwindling end of the line. The only company that would exist is Pacific Locomotive Company, but the game doesn't really explain the railroad business as deeply as one would hope. All I do know, is that there where the usual freight trains...

And the COOLEST looking passenger/express trains... 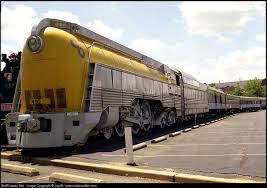 The major personal boat builder at the time was Chris-Craft Boat Company. As for who builds the gun boats, I don't know. Military boats where often built in government shipyards, but since there are so many governments, and only one kind of gunboat, I can't say which one built them. So for know, we'll leave them alone. Larger ships where built by Peninsular and Oriental Steam Navigation Company (P&O). Submarines (such as the one in the last Hawaiian mission in the game) also fall into the "government- built" category. But there is proof that Japan had aircraft launching subs at the time. But considering the one in the game was British-owned, we have a good idea of where they are based. Yachts were built by the Mathis Yacht Building Company.

Chris-Craft Boat Company: the only major personal watercraft building company at the time. These boats were very expensive, but very fast for their time.

P&O: most ships at this time ran on steam and coal, at least until the late 40s. The Red Cross medical ship in the game that was based along the cliffs was common as a P&O passenger liner, and the Russian oil tanker you steal fuel from near the islands, and freighter you blow up in Manhattan are classic cargo vessels of the time. 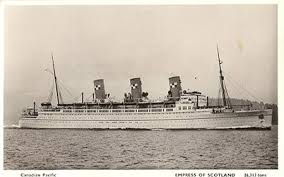 Government/Military: I have no idea what companies would build military ships, such as aircraft carriers, battle ships, submarines, and gunboats. Possibly a sea-side nation big and powerful enough to have a shipyard (such as the Empire State, Nation of Hollywood, Confederation of Dixie, maybe even the United States of Mexico, etc.). It's best just to leave these ships alone, and let each nation build them as they please.


Please, feel free to correct me, and insert any suggestions you might have.
Montana Zeppelin & Radio Company
Top

THANKS! I was going to do a post this weekend asking for this very thing, thanks for the head start.

Also this a great site for information about whats available, how much it cost [back then] and how much various incomes generated.
Top

These are topics dear to my heart! Please do continue!
Flying the Crimson Skies
Top

You're welcome, fox. I put this up because I saw your threat to seriously start a mod of this game, and if it's going to take place on the ground and sea as much as it did in the air, it'd be best to look for a post such as this, and site such as you suggested (thanks for the link by the way) to get an idea as to what these vehicles should be based upon. Here's another piece of rail history that most people would easily forget, unless your a proud Montanan. Grant might know a bit about this...

Electric trains: yes, they did exist in the 30's, the Milwaukee Road started using electric railroads in the mountains of Montana in 1914, hauling large freight loads. They weren't the fastest trains, nor were they fancy looking things (some looked like a block on wheels, others like a pipe on wheels), but they worked just the same.

I'll be trying to expound on this as much as I can, and keep aircraft out of this post as much as possible (there's already enough of them). But I still look for suggestions from others viewing this topic.
Montana Zeppelin & Radio Company
Top

Cool!
Through my own research I know what 1930's Australia looked like, but 30's America was very different.
So thanks for these tid bits.
One of the things i have been researching is popular name brands for the time, like motor oil, electronics, etc . . .
Top

The major motor oil at the time would probably be Penzoil, who also had a few gas pumps as its own.

A major electronics supplier at the time would be (who else but) General Electric (yes, they have been using the same logo since the 1800's). 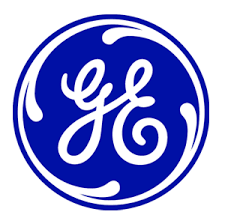 Something else to consider with companies is whether they would have split with the collapse. Certainly some of the new nations nationalised a few companies as they broke away.
4L3C - 4R3E
Top

Thats a good point Jester, What I think we need is a list of what the popular companies were during this time and find out where their corporate offices and main manufacture areas are located.
This should tell us which nations might appropriate or nationalise them.
In the cases where the corporate offices and main manufacturing plants are in different states maybe they split into two companies both claiming they are the real and the other is a fraud.
Top

I suspect that many companies would simply become multi-national. North America, despite being fractured into many nations, will still remain economically tied for many years to come. In fact I would bet that, if anything, international trade would EXPAND on nearly every front and economic facet with more and more companies forming international alliances or flat out becoming multi-national concerns. . .
Flying the Crimson Skies
Top
BUTTON_POST_REPLY
18 posts