by foxmalcolm
Whilst I agree on that in principle, I feel that some companies that find themselves in waring nations might not be able to maintain any sense of cohesion or unity.

For instance, lets say that a company exists in both the Free Nation of Colorado and the Nation of Hollywood.
Lets say that the product being manufactured is used by both Hollywood Militia and local pirates.
The Nation of Hollywood declares that said company must cease selling said item in Colorado, the Hollywood execs' agree but the Colorado ones do not as this is their main source of revenue.
Hollywood threatens legal and military action.
This leaves said company with only a few options, leave a lucrative market in Hollywood and move offices elsewhere and still risk action by Holywood.
Stay and continue as normal and face heavy fines and sanctions [not to mention arrest and trial].
Or declare the obsternate exec's in Colorado as a renegade splinter group of thieves who have stolen their product and offices and are smearing their name and reputation.

Now granted this is an extreme case, but consider that the more lucrative the product being sold is the more each country would want to have taxable control over it.

by Thom
Undoubtedly some companies would fracture just like their respective nations. But it brings up the question of Debts. If a company in California owes a debt to a bank in New York, did that Debt remain AFTER the nation shattered? If so and that company went bankrupt, would the New York Bank end up owning a California company? (It is so very hard to call a nation Hollywood!) OR. . . Would a bank in New York be willing to finance a new start up company in California? (I only use those two states as examples and I say New York instead of The Empire State as that nation is made up of multiple states. . .) What about Banks like 1st, 2nd & 3rd National Banks which had branches in every state (And in Canada!) back then? Are they still mostly intact or were they ripped apart? Or is it somewhere in between? There were Ford & Chevy dealers in every state, will they remain Ford & Chevy dealers buying from the ISA?

In my own Big Sky Republic, I envisioned Capitol Ford (The seventh original Ford Dealer in the world, and at the time of the collapse it was the sole distribution center for the entire North West, responsible for supplying cars and parts to all the dealers in the North West region from Montana west to the coast and south to Colordao and west through Northern Nevada & California) of Helena Montana, which had the regional parts depot, as becoming a break away entity in their own right, at fist building cars with surplus stockpiled parts, then later making their own variant Ford cars with locally manufactured parts.

There are many spots in the nation where local industry can get a quick bootstrap so naturally it should happen, BUT that does not mean the big companies will automatically loose all of their markets. It just stands to reason that Ford will continue to sell trucks and cars to most of North America, business as usual. And so it would be with most major corps.

Nabisco snacks and crackers had plants and factories in a dozen states, maybe some of those would go independent, but many or most of them would remain aligned and continue under the same structure OR come to terms with licensing agreements for brand names, package designs and recipes. . . .

I can see local military assets defaulting to local control, the guys stationed at that base live there, they probably have their families there, but it is not so easy to imagine with commercial assets, money talks! Yes I can see some technologies, like military hardware, being more strictly controlled, but things like Nabisco 'Nilla Wafers or Ivory Soap, or Kellogs Corn Flakes will most likely remain under the original corporate control!

by Captain Zee
Here's how the Universe divides up the major corporations by nation:


All headquarters operate as well as factories. Companies with just one locale means that the Universe didn't supply anything else but that one area. Companies with just nations as their locale means that the Universe did not specify the city or town the factories/headquarters were based. Please fell free to correct me. All this information was taken from the Crimson Skies Universe Corporations page.

by Captain Zee
Well, it's time for me to pull my head out of my ass and admit that General Motors would be a vehicle company. Rivaling that of Ford, GM would make cars, but except for trucks, it builds busses. However, GM's politics are much more complex, by merging with Messerschmitt (changing the abbreviation to GM/M) and a partial merger with Bell Aircraft Engineering, which was interrupted when Hughes Aviation sued Bell for ripping off one of their Bloodhawks. So, if they are continuing to prosper enough to build and maintain their vehicles or not is unknown. But, here are some photos of their old rigs, courtesy of Google Images. 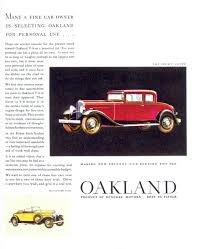 Now General Motors built the first real busses, known as the Yellow Coach bus, such as this one, in the 30's... 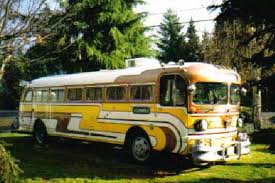 But the one I see fits Crimson Skies in a hauntingly perfect way, is this one, built in the same era... 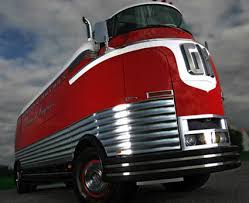 She was originally designed as a bus, nicknamed "The Futurliner," but was declared "too eccentric" for the time, and instead was transformed into a traveling exhibit. Yet, as I imagine in Crimson Skies, people would shrug this off as an attempted to attract them back "down to earth." Fox, if you need a vehicle for mass ground transportation, please use this one!

by Thom
I love the Futurliner! Sweet find!

They also, incidentally, owned the Frigidaire refrigerator company until 1977...

by Captain Zee
I feel as if I need to say something on this post concerning these corporations and the Confederation of Dixie. It has to do with some politics, and I know we try our best to keep them off this site, but Dixie has an interesting law concerning the corporations within it. Simply put, the law prevents any corporation from outside the Confederation from taking legal action against corporations with headquarters based within the nation. This is further explained on the Universe when you look up Bell Aviation and Hughes Aviation.

And with that out of the way, I will now ask that if you have any questions concerning ground/sea vehicles in Crimson Skies, along with other non-aircraft affiliated objects, please ask, as I have run out of ideas of what else to post here. Thanks!

by Captain Zee
Aha, I missed a company, and seeing that its not in Steams list, it's not a GM affiliated company.

Packard was a major company in the thirties, doing as Rolls-Royce would be doing, only entirely reliant upon the luxury car business. They did succeed for a what would be a considerably long time (1899-1958), and I guess they would be the North American Rolls-Royce equivalent.